The coronary arterial wall generally consists of the tunica intima, tunica media and tunica adventitia. In particular, the coronary adventitia harbours the vasa vasorum (VV),which has a diameter of 50–300 μm and plays an important role as a network of nutrient blood vessels to the arterial wall (Figure 1).1–3

The VV is enhanced in association with arterial wall thickening when the wall exceeds 29 lamellar units in mammals.4Intraplaque neovessels arising from adventitial VV leads to intraplaque haemorrhage,5,6 resulting in coronary plaque disruption (Figure 1).7,8 Thus, efforts have been made to identify the coronary VV in experimental animals and humans.9Indeed, recent advances in the field of intracoronary imaging have enabled us to visualise the coronary VV in humans in vivo, and have shed light on the clinical relevance of the VV in patients with coronary artery disease (CAD).10 In this brief review, we provide an overview of the recent progresses in intracoronary imaging for VV visualisation.

Intravascular ultrasound (IVUS) has been a most widely-used intracoronary imaging technique that offers a spatial resolution of 100 μm,11 with the potential for VV visualisation and the detection of volume of blood flow in the VV. On cross-sectional IVUS imaging, the VV can be seen as a small, tubular, low-echoic structure (Figure 2A).12

In a human autopsy study by Kume et al., a 40-MHz IVUS (Boston Scientific) was used to detect adventitial VV, which was validated with histology.12 For the measurement of VV distribution, Moritz et al. developed the special IVUS system (ChromaFlo®, Volcano Corporation), which was used for blood flow detection within the arterial wall.13 In the Moritz et al. study, blood flow in the VV was colourised within the encompassed arterial wall on the IVUS image, which was obtained using porcine coronary arteries in vivo (Figure 2B).13 The VV area on the IVUS showed a strong correlation with the VV volume measured with micro-computed tomography (MCT) using the same porcine tissue ex vivo.

Based on their histological validation study, Kume et al. demonstrated with a commercially-available IVUS that the prevalence of the VV at the proximal and distal reference segments adjacent to culprit lesions was significantly increased in patients with acute coronary syndrome compared with those with stable angina pectoris.12,14 Using commercially-available echogenic microbubbles composed of albumin microspheres filled with octafluoropropane gas, Vavuranakis et al. demonstrated the feasibility of the IVUS contrast-enhancement detection techniques for the VV in both the adventitia and the plaque of human coronary arteries in vivo.15

A fundamental limitation of IVUS is that it does not possess sufficient resolution for visualising the VV <100 μm, while the penetration depth of 8–10 mm seems to be sufficient for reaching the adventitia. A highdefinition, 60-MHz IVUS with superior spatial resolution <100 μm might have the potential to resolve this.16 Another limitation of IVUS is that serial studies are needed to verify the accuracy of VV visualisation and measurements unequivocally.

Optical coherence tomography (OCT) is another commerciallyavailable intracoronary imaging technique that offers a spatial resolution of 10 μm, using backscattering of near-infrared light.11,17 The resolution of 10 μm is high enough for detecting the VV of any size in humans in vivo. On cross-sectional OCT images, the VV can be visualised clearly as signal-voiding tubular or layer structures (Figure 3). 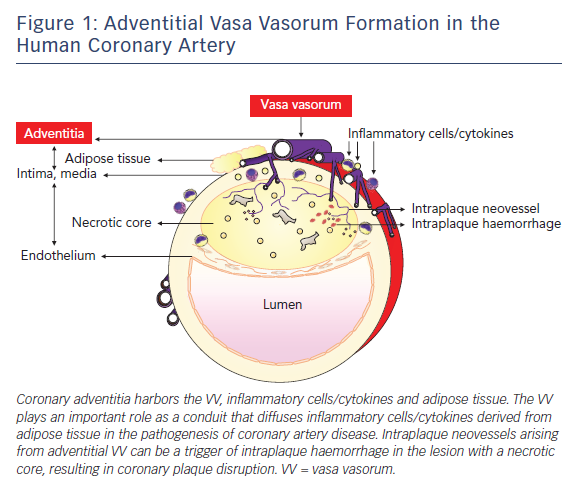 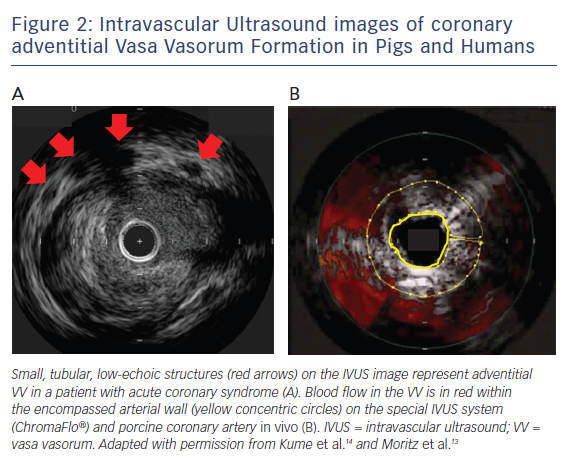 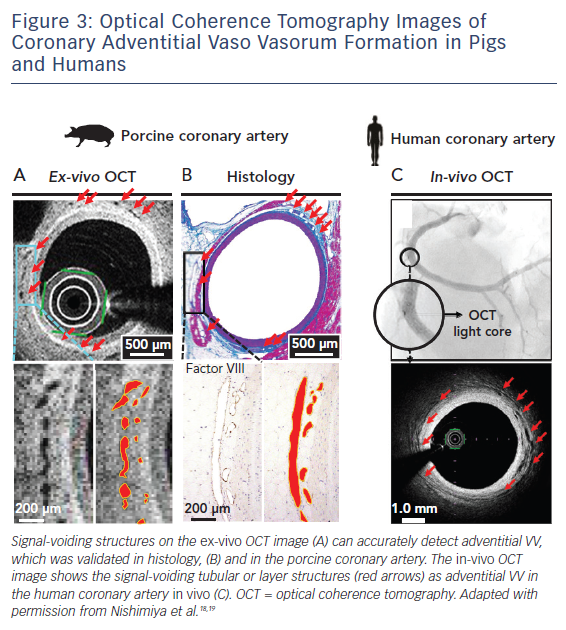 In a post-mortem study, Vorpahl et al. first reported the possibility that small black holes on cross-sectional OCT images correspond to intraplaque neovessels arising from the VV in the histology of a patient with ruptured plaque ex vivo.1 We were able to demonstrate for the first time that a second-generation OCT (Terumo) is capable of visualising the adventitial VV in porcine and human coronary arteries ex vivo and in vivo (Figure 3).18,19 We also showed the accuracy of manual measurements for adventitial VV on cross-sectional OCT images.19 In order to develop the measurement method, we defined adventitial area as ‘area outside the external elastic lamina within a distance of the thickness of intima plus media – vessel area’ and adventitial VV area as ‘adventitial VV area / adventitial area’.20,21 Another human autopsy study by Aoki et al. demonstrated the usefulness of 3D volume-rendering OCT reconstructed with the ANALIZE software (Biomedical Imaging Resource) for the volumetric analysis of adventitial VV, which was validated with the number of VV counted on MCT.22 In the Aoki et al. study, adventitial the VV was defined as signal-voiding tubular or layer structures with diameters from 50 to 300 μm, which were consistently noted in at least two consecutive slices and located within 1 mm from the lumen–intima border.22

Coronary vasomotion abnormalities, such as coronary spasm and coronary microvascular disorders (CMD), play key roles in the pathogenesis of CAD. We were able to demonstrate for the first time that the OCT-proven adventitial VV is markedly enhanced along with the spastic coronary segments in patients with vasospastic angina.20,21 In our study, the extent of the VV formation was highly correlated with that of acetylcholine-induced coronary vasoconstricting responses and activity of Rho-kinase, a key molecule of coronary spasm.30 Coronary blood flow assessment combined with OCT observation resulted in adventitial VV density being negatively correlated with endothelium-dependent microvascular function, and positively correlated with endothelium-independent microvascular function, suggesting that adventitial VV has relevance to CMD in the early stage of coronary atherosclerosis.31

Notably, we recently demonstrated that coronary segments under a myocardial bridge (MB) lack adventitial VV compared with proximal or distal reference segments.32 Because the VV carries inflammatory cells and cytokines derived from pericoronary adipose tissue (PCAT) to atherosclerotic lesions, this result could explain, at least in part, the fact that coronary segments under an MB have less atherosclerotic lesions. Sudden coronary artery dissection (SCAD) has emerged as a cause of heart attacks among young women, especially during the peripartum period. An OCT study by Kwon et al. found evidence that adventitial VV is augmented at the coronary segment of intramural haematoma in patients with SCAD.33

First, the penetration depth of OCT light is limited in few millimetres, and is prone to higher absorption in the advanced coronary lesions (e.g. lipid-pooling and necrotic core), which limit the visualisation of adventitial VV behind such lesions. Second, it remains to be elucidated whether or not OCT-derived VV arises from arteries or veins. Third, the current OCT system is not equipped with the facility for blood flow measurements in VV. Interestingly, Cheng et al. reported an intensity kurtosis detection method on OCT that may enable us to examine blood flow dynamics in VV.34

The formation of VV has been suggested to initiate the development of coronary atherosclerosis.35 We recently demonstrated that 18F-fluorodeoxyglucose (FDG) PET can accurately detect PCAT inflammation in pigs ex vivo and in vivo.36 Further studies with multimodalities (e.g. OCT combined with FDG PET) are needed to elucidate the causal relationship between adventitial inflammatory changes and the manifestation of coronary atherosclerosis. Moreover, there is a pressing unmet need for direct and/or indirect therapeutic approaches to mitigate adventitial VV angiogenesis. Importantly, we recently demonstrated that after drug-eluting stent implantation in pigs in vivo, adventitial sympathetic nerve fibres (SNF) can be enhanced and associated with adventitial VV growth. Catheter-based renal denervation also significantly upregulates the expression of α2-adrenergic receptor-binding sites in the nucleus tractus solitaries and attenuates adventitial VV enhancement associated with a decrease in SNF.37 Thus, intracoronary imaging could also be useful when testing these novel approaches in practice.